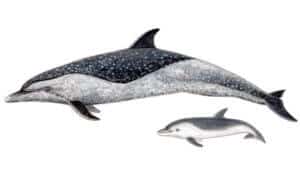 This species can be confused with the bottlenose dolphin and particularly the differentiation of the calves is sometimes dificult, despite the spotted dolphin being smaller in size. The most distinctive feature is the spotted skin, noticeable in adults. With an active behaviour, they often approach boats, jump and surf the waves, producing a very spectacular sighting. Large groups, particularly of females and calves can be observed frequently in Tenerife from autumn to spring.