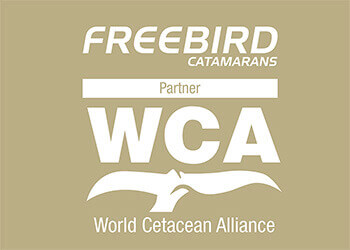 As the first company in Tenerife, Freebird Catamarans signs the long term cooperation agreement with the World Cetacean Alliance on maintaining an international cooperation to protect whales, dolphins and porpoises (cetaceans). On november 22, the owner of the Freebird Catamarans company Mr. Marco Antonio Magariños and World Cetacean Alliance (WCA), signed an international cooperation agreement in order to maintain a long term cooperation on an international level, to protect whales, dolphins and porpoises (cetaceans). As a leader in the catamaran cruise industry on the Canary Islands, Freebird company starts a long term campaign and plans a huge package of activities focused on the protection of whales, dolphins and cetaceans in the Atlantic Ocean. This is a first stage of a bigger cooperation program, which the company wants to start on the Canary Islands. The main goals of all actions are to protect Cetaceans and inform and educate local citizens and tourists who are discovering the beauty of Tenerife and the Atlantic ocean during their 3h and 4,5h whale and dolphin watching excursion in Tenerife. More info about things to do in Tenerife. 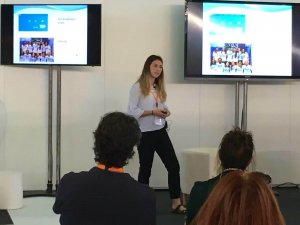 Sophie Lewis, head of the Working Group on Whale Watching, of the World Cetacean Alliance, in Gran Canaria

The World Cetacean Alliance (WCA) is the world’s largest Partnership of companies which are working together to protect whales, dolphins and porpoises (cetaceans). Through cooperation, the Partners of the World Cetacean Alliance aim to conserve and protect cetaceans and their habitats in the world’s oceans, seas and rivers, to ensure their continued health and survival. The WCA is committed to prevent all cetaceans from being held in captivity, except for rehabilitation and release purposes. We are also developing and implementing new concepts for responsible whale and dolphin watching with the potential to inspire and educate millions of people. Finally, we aim to expand the global community of people who care for cetaceans, have a desire to learn about them, and respect them.   It also carries out important work to publish conservation and dissemination projects, such as the recent conference given by Sophie Lewis, responsible for the Whale Watching Program of the World Cetacean Alliance, at the 41st International Fair of the Atlantic, held on November 23 in Gran Canaria. The World Cetacean Alliance connects its Partners both nationally and internationally. This local-to-global approach enables the Partnership to deliver coordinated and practical strategies on the ground, whilst representing the views of its Partners on the international stage. Our approach will deliver a sustainable future for the world’s cetaceans, their habitats, and the global community of people reliant upon the sea. More info about WCA international  partners can be found this link: