We don’t have to get too far away from sun and beach tourism to be able to see migratory cetaceans in Tenerife. We could even say that it is a different experience in one of the most touristic areas of the island. From Puerto Colón and to Los Gigantes, recreational boats travel in search of exotic specimens of whales and dolphins. But, how to choose among the great offer of catamarans that cross the waters of the Atlantic between Tenerife and La Gomera? What are the species that we can see and when? Join us on a journey beyond all-inclusive hotels. Discover the most natural Tenerife!

Although the resident cetacean species of Tenerife are pilot whales and bottlenose dolphins, there are half a dozen sporadic cetaceans and as many seasonal ones. There are also some species of cetaceans that have rarely been seen, only ocassionally. Can you imagine meeting any of these strange species during your catamaran excursion to see cetaceans? 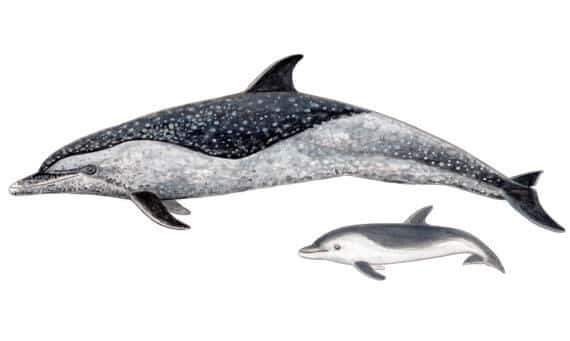 Features: The spotted dolphin reaches more than 2 meters, although it is not one of the largest dolphin species. Its weight reaches 80 kilograms. They are spotted, so they are very recognizable. Active and lively, these dolphins do not go unnoticed in the sightings.

When to spot it in Tenerife: You can see it all over the year, although more frequently between spring and autumn.

Possibilities of sighting: It is another of the migratory cetaceans that can be seen throughout the year because, really, they are sporadic species. Of course, it is in its natural environment so we can never guarantee 100% that we will see it. But isn’t that just the exciting thing?

Features: It is one of the cetaceans with more hopes of seeing by tourists who book sighting excursions. The sperm whale (physeter macrocephalus) has striated skin, a giant head that identifies and differentiates it from the rest, a dark skin and a very small dorsal fin in relation to the body. Some specimens weigh 60 tons and reach 18 meters in length. His eating habits have forced him to have to hold his breath for up to 60 minutes to be able to dive deeper than 2,000 meters. A born diver!

When to spot it Tenerife: Throughout the year in the ZEC Teno-Rasca area, the protected area that includes Santiago del Teide, Adeje, Guía de Isora, Arona and Buenavista del Norte.

Possibilities of sighting: Sperm whales are relatively easy to spot throughout the year. Although it is much more common to see pilot whales or bottlenose dolphins, the truth is that it is not unusual that these aquatic giants surprise us in our tour with one of their imposing dives.

Features: The grampus griseus is another migratory cetacean in Tenerife that you can easily see because they weigh up to 600 kilograms. They are very similar to Short-finned pilot whales and, sometimes, they are confused with them. As many of their species, they are sociable animals that gather up to 30 individuals in their herds. Also as in other similar species, Risso’s dolphins are usually divided into females and young or males separately.

When to spot in Tenerife: Throughout the year. The Risso’s dolphin reaches a length of 3.5 meters so it is not the largest.

Possibilities of sighting: Due to its great resemblance to the short-finnes pilot whale it is very possible that you see some and confuse it… But the guide will differentiate it for you! However, it is very difficult to spot in the Canary Islands but, as always, not impossible.

Features: The Bryde’s whale is an impressive titan that reaches 15 meters and has the peculiarity that the females reach the largest size. You will differentiate them by their dark blue-gray back, clear throat and belly and lighter flanks than the rest of the back. They are imposing and relatively frequent but they usually abound more on the high seas. As a hallmark they have three dorsal ridges instead of the usual dorsal crest.

When to spot in Tenerife: The island invites these visitors to come here throughout the year.

Possibilities of sighting: It is not uncommon to see a common whale or a Bryde’s whale but it is not guaranteed either. 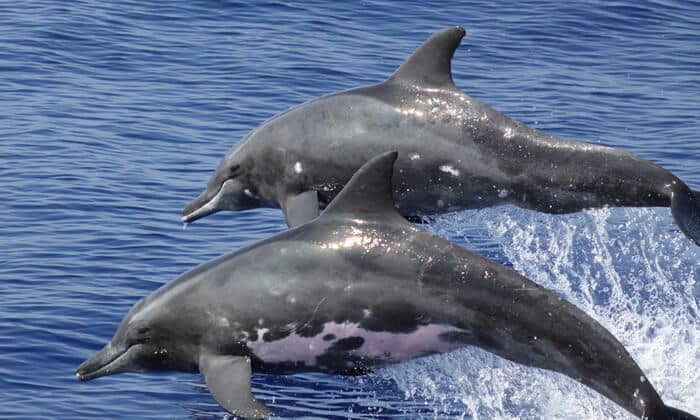 Features: You will differentiate because they have a darker color than bottlenose dolphins with a greater contrast in their white spots. They are distributed in groups of 6 to 10 individuals and their weight is about 150 kilograms, with a length of up to 2.7 meters. Less stylized than short-beaked common dolphins or bottlenose dolphins, you will see them a little «fat» although that is really their normal size. They are better divers than other species, being able to submerge up to 15 minutes.

When to spot Tenerife: All year.

Possibilities of sighting: Easy although for the inexperienced eye it may be difficult to differentiate these from other dolphin species.

Features: This dolphin species is named after the stripes that can be seen from the eyes to the tail. It is one of the easiest to identify and also the most beautiful. It is very fast and usually weighs about 100-130 kilograms. Its length reaches 2.7 meters in the largest specimens.

When to spot it in Tenerife: You can see it all over the year.

Possibilities of sighting: It is very easy to identify so you will distinguish it perfectly if you go to one of the whale sighting tours in Tenerife. 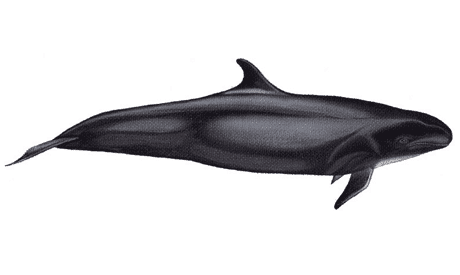 Features: False killer whales reach 5.5 meters long and weigh 2 tons. They have teeth and their dorsal fin reaches up to 30 centimeters high. Of a dark gray color, it is very sociable and you can find herds of thousands of specimens.

When to spot it in Tenerife: You can see it all over the year but in spring and autumn it is easier to see a specimen.

Possibilities of sighting: It is quite difficult to see although of course if it is migrating and swims near you, you will recognize it. 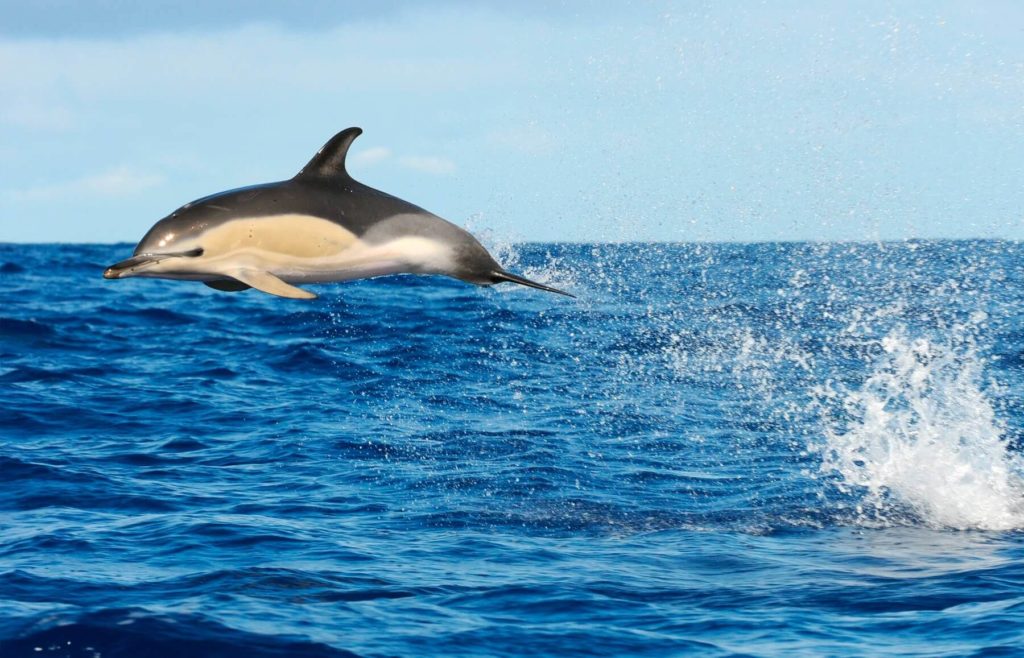 Features: Present in nearly all the seas of the planet, it measures 2.5 meters and weighs up to 130 kilograms. These dolphins are very intelligent and lively, although less easy to spot than bottlenose dolphins, at least in Tenerife. The brain of the short-beaked common dolphin is large compared to that of other similar species. The behavior of short-beaked common dolphinss has often been studied due to the spectacular intelligence they seem to have.

When to spot it in Tenerife: Winter is the season of the year in which it is very possible to see short-beaked common dolphins.

Possibilities of sighting: High in the months of December and January.

Features: This cetacean holds the second position as the largest animal on the planet, so finding one specimen could be a spectacle. It has a length that reaches 27 meters and receives the name “greyhound of the seas” because they can reach underwater speeds of more than 40 kilometers per hour. They usually live in groups of 6 to 10 specimens and they are more gregarious compared to other whales.

When to spot it in Tenerife: They are easier to spot in the fall and winter months.

Possibilities of sighting: It is not common to see these cetaceans in the ZEC area because they are a rather elusive species. Still there are possibilities to see them in their natural environment.

Features: Less large than the Fin Whale, the sei whale reaches about 16 meters in length. It is an imposing cetacean that weighs up to 30 tons and it has even confirmed the existence of 45-ton specimens. Similar to Bryde’s whale, experts distinguish it because it has a different dive sequence, more constant than other species. The sei whales are solitary although sometimes they have come to see large groups in abundant food banks. Their speed reaches 47 kilometers per hour, making them excellent swimmers.

When to spot it in Tenerife: During the migration season, between fall and spring.

Possibilities of sighting: Sei whales are difficult to spot because they barely reach the surface, so it is only possible to see them if the waters are very calm. Again, it is not impossible but it is hard.

Other species that rarely can be spotted in Tenerife

Although more difficult to observe, you may stumble upon other specimens such as the killer whale (imagine it!) although it is very unlikely. In addition to this, blue whales, humpback whales, common minke whales, Fraser dolphins, pygmy sperm whales, Cuvier’s, Gervais’ and Blainville’s beaked whales have been spotted sometimes. What about if you don’t want to leave without seeing the Cuvier’s or Blainville beaked whales? Maybe you should think going to El Hierro where you can see them nearly throughout the year. In La Gomera you can also see roughtoothed dolphins. 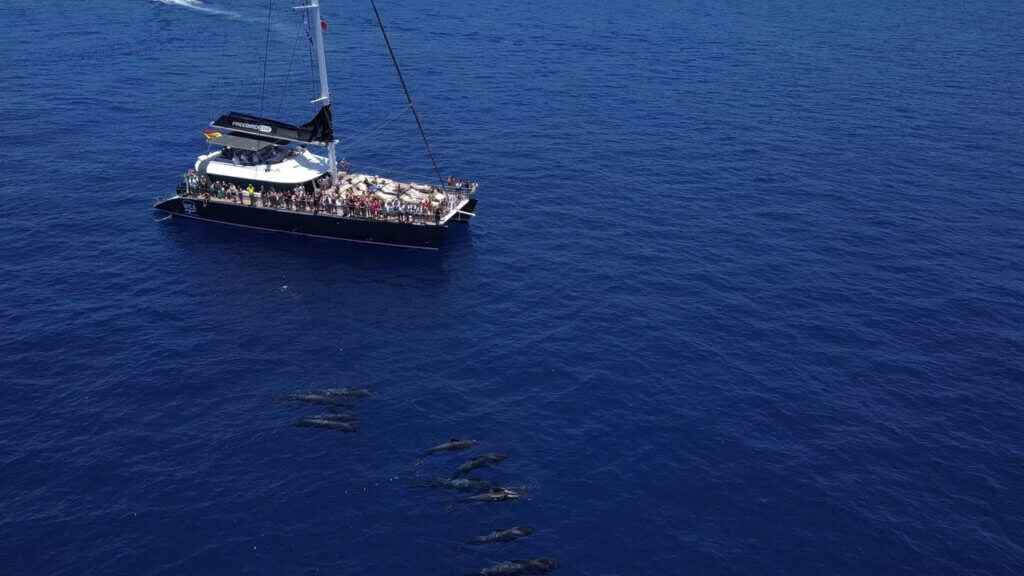 After having read all this you will surely be thinking how it is possible that you have not considered to take a whale watching tour in Tenerife. Well, you may have made a very wise decision because until now you did not know some things about cetaceans that you can see or the services that a whale watching tour may offer:

And if that were not enough, the magical experience of watching whales and dolphins in Tenerife. Of course, we can not guarantee 100% the sightings. Let’s not forget that we are in the natural environment of these cetaceans and that it depends on them that they want to show or not. But isn’t that what makes these tours special? We are not talking about seeing a bottlenose dolphin through a mirror, but of watching it jumping and enjoying its freedom. It is a very enriching experience for the little ones, who will discover that there are few things more precious to these animals than to be able to live with their herd.

In addition to all of the above, Freebird whale watching tours has a professional sailor group. Thanks to them you will discover Costa Adeje (on the 3-hour tour) and Costa Adeje, Los Gigantes and Barranco de Marca (on the 4.5-hour tour). Freebird tours are aimed at the whole family. The entire crew will ensure that you enjoy a magical journey. Do you want a plan for your vacation in Tenerife? You want it you got it!

The space called the Teno-Rasca Marine Strip is located in the western sector of the island of Tener...

Tenerife has a very extensive and solid tourist infrastructure that has taken advantage of this time...

Tenerife is one of those rare travel destinations where you needn't worry about what the weather wil...