If there is something that the Canary archipelago has, it is that nature and that charm that leads visitors from all over the world to be attracted to its many things to do in Tenerife. But there is another detail that far exceeds the expectations of the most intrepid and curious travelers. It is the unique opportunity to sail a few meters from pilot whales or bottlenose dolphins throughout the year. Also, if you are lucky enough to travel to Tenerife in time of migration, you can also discover more than 22 different species … With a little luck! This natural activity annually attracts hundreds of thousands travelers who marvel at the coast of the island while enjoying the sea. You can sail throughout the year to see whales and dolphins in Tenerife since these cetaceans remain in the sea that separates the islands of Tenerife and La Gomera, which is one of the quietest. Do you want to know more about these friendly mammals?

Would you like to know more details about the whale watching tours? And what about the resident cetacean species in Tenerife?

Did you know that the Canary Islands are the point of migration of more than 22 different species of cetaceans? The reasons why so many species of cetaceans can be found in the archipelago are the volcanic origin of these islands, that makes it possible because the waters between islands have a depth of up to 3,000 meters and that the Canary archipelago is the point that marks the southern limit of distribution of cold water species and also the northern limit of tropical water species. In some way, it is a neutral ground for the migrations of all of them.

From the mythical blue whale to the oceanic dolphins. All of them are part of an exodus that, year after year, becomes a tourist attraction in which no living being is damaged but observed in a respectful way. However, migrations only occur a limited number of times a year while the cetacean species resident in Tenerife remain in the waters of southern Tenerife throughout the year. Meet the two resident species of cetaceans in Tenerife!

The short-finned pilot whale is part of the dolphin family and one of the resident cetaceans on the island of Tenerife that you will surely see if you dare to live the experience of taking a dedicated tour.

Physical features: The short-finned pilot whale has a dark gray to black color although it is common for them to have white spots in the ventral area. Males reach a length of 6.7 meters and females 5.5 meters. Its weight ranges between 1,000 and 4,000 kilograms. Males have the area that is above the head (called melon in slang) more developed. These cetaceans have teeth and are called a «pilot» because of their size. 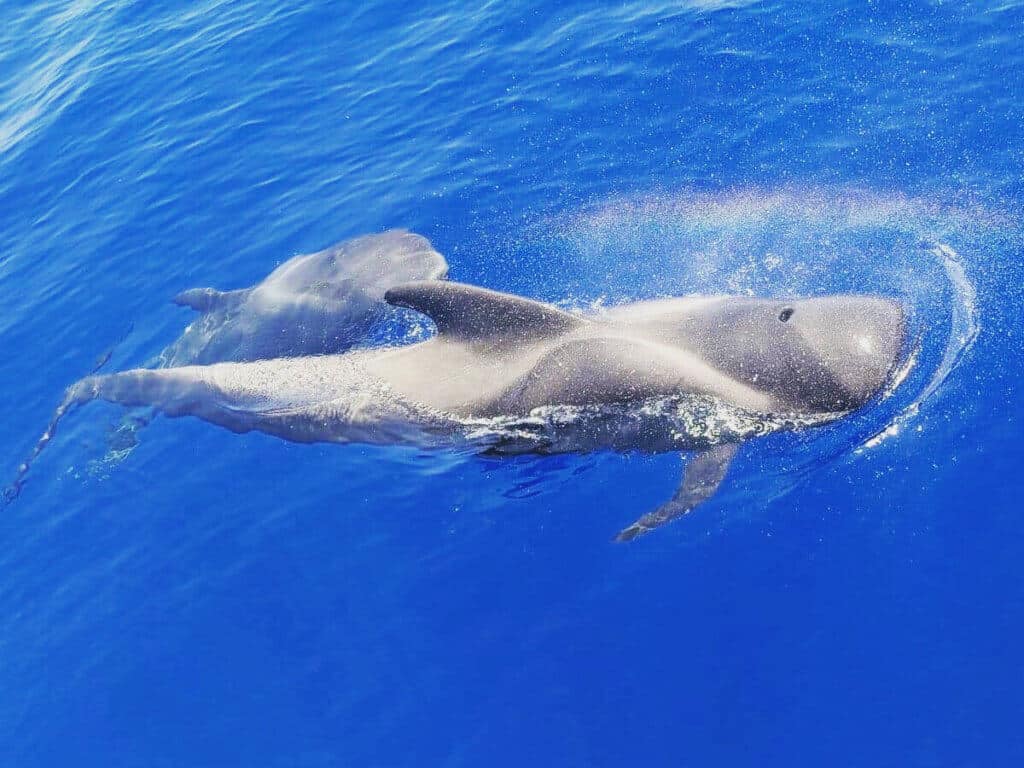 Behavior: If you are lucky enough to see these cetaceans in Tenerife you should know that they never travel alone. Pilot whales travel in groups of up to 30 individuals and, sometimes, large groups of up to 60 specimens have been found. Short-finned pilot whales feed on octopuses and other species that are believed to being caught using their melon.

Sighting Frequency of pilot whale: In a whale watching tour in Tenerife on a quality catamaran, there is a 98% chance of seeing a pilot whale so it can be said that you will almost be guaranteed to see them. Of course nothing is 100% safe when we talk about sightings since they are in their natural environment, but that is the magic of living the adventure of following cetaceans through the waters of the south of Tenerife.

Sighting areas: The short-finned pilot whale can be seen in temperate and tropical waters throughout the world, especially in deep waters. The Canary archipelago is an ideal home for these cetaceans because the waters between the island are very deep.

Other information of interest: It is difficult to know the amount of pilot whales distributed throughout the world since they occupy practically the entire globe except the Arctic and Antarctic areas. Will you be lucky with them in Tenerife? 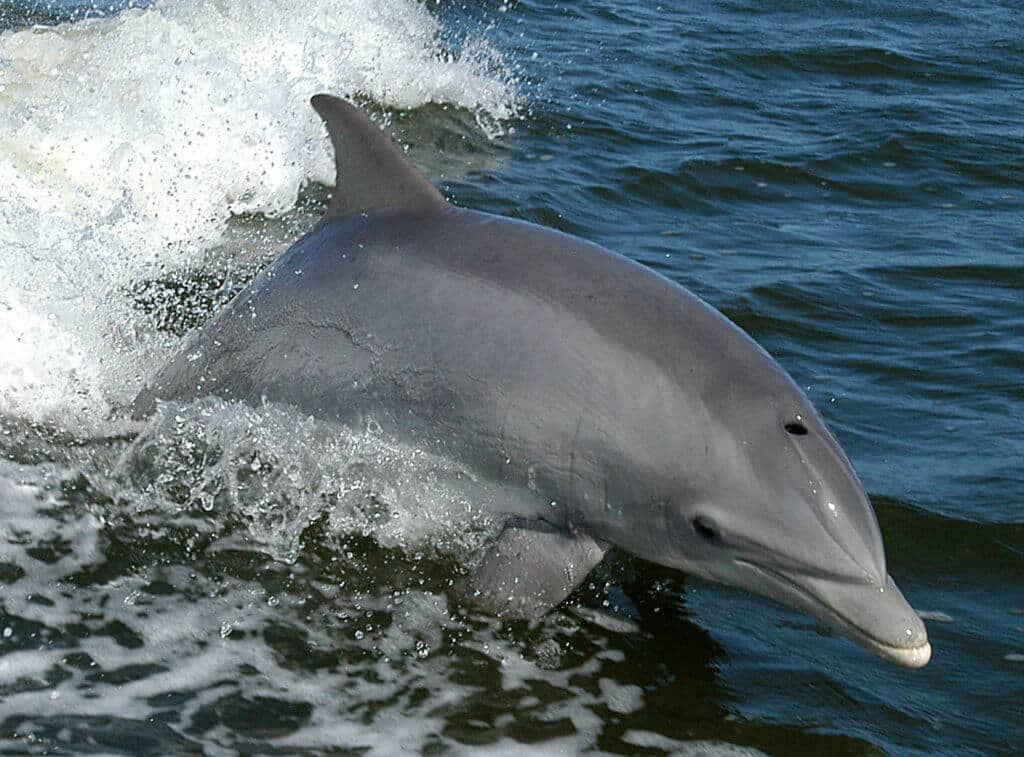 The Bottlenose Dolphin lives permanently in the southwest of Tenerife

Common bottlenose dolphins are also very easy to see on a whale watching excursion in Tenerife. It is one of the more than 30 species of dolphins that exist and also the most recognizable for having appeared in television series and movies. Who doesn’t remember Flipper? We will find bottlenose dolphins throughout the year on the island of Tenerife.

Physical features: Common bottlenose dolphins reach more than 3 meters when they are old. Adult males measure 2.7 meters and females 2.5 meters. They are robust cetaceans that exceed 500 kilograms in weight. Their life expectancy is about 30 years and they usually meet in groups of 10 to 30 individuals separated by sex. Its gray color and its degraded back are its hallmarks along with the nice and lively jumps that usually occur when they are next to the boats reaching a speed of 3 to 6 knots (between 5 and 11 kilometers per hour!). Dolphins breath through a spiracle so they must surface every 5-8 minutes.

Behavior: These intelligent animals communicate to each other through great precision clicks and whistles, they can recognize themselves in a mirror, they are able to use some tools and there are even studies that suggest that there is a certain “culture” among dolphins. 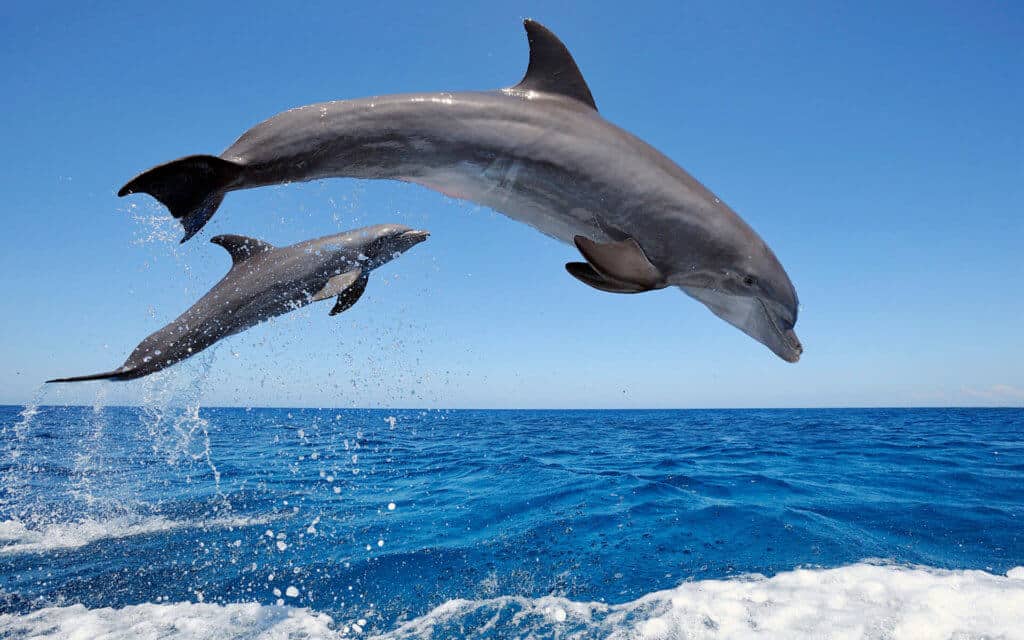 Sighting frequency of common bottlenose dolphins: Common Bottlenose dolphins can be seen all almost over the year in Tenerife. While it is true that it’s easier to see other cetaceans in Tenerife, like pilot whales, it is relatively easy for you to find yourself in your whale watching catamaran and, suddenly, several bottlenose dolphins accompany you to the port. We cannot say 100% that you will watch these resident species in Tenerife but there are very high possibilities throughout the year.

Sighting areas: Bottlenose dolphins swim in all waters around the planet except in the Arctic and Antarctic seas.

Other interesting facts: Did you know that according to various related studies, dolphins accept humans so well for a biological reason? However, it has been assumed that there is a risk due to their excess of confidence in the human being. Ours is the responsibility not to harm these sociable and intelligent animals.

The ZEC Teno Rasca Zone is the area of protection of cetaceans in Tenerife. Infographic of the Cabildo de Tenerife

ZEC Teno-Rasca zone, the perfect place to live… if you are a cetacean

The protected area called the ZEC zone is also the sea strip between Teno and Rasca, a sector located in the western part of the island that bathes the coast of Buenavista del Norte, Santiago del Teide, Adeje, Arona and Guía de Isora. It has an area of ​​almost 70,000 hectares that virtually concentrates all species of cetaceans of Tenerife. Up to 22 different species of large and medium cetaceans have been registered in this area, so sightings are very frequent in the zones covered by the ZEC area.

But, what are the conditions of the ZEC Teno-Rasca zone that make it so appealing for short-finned pilot whales and common bottlenose dolphins? A key reason is the depth of the waters between the islands of Tenerife and La Gomera that creates the perfect conditions for these large mammals.

To this must be added the structural complexity of this area included in the “Natura 2000 Network” for its importance in marine biodiversity. In this area we can find seagrass beds, sand without vegetation, sand bottoms with populations of brown garden eel, algae, whitish clay areas or reef structures. A potential feast for these cetaceans.

If it has already become clear to you that life does not consist in accumulating things but that it is formed from the experiences that you live, then you can imagine the emotion that generates the possibility of watching whales and dolphins in their natural environment, without limits that imprison the nature. In complete freedom and without filters. This is how whale watching tours are in Tenerife. And although there are many ways to see pilot whales in Tenerife, none of them respects the freedom of these cetaceans more than responsible catamaran tracking. The tours begin in Puerto Colón when the captain, the specialized guide and the first on board take the adventurous travelers to their seats. The adventure begins! After some indications, the short-finned pilot whale watching route and, if we are lucky, of bottlenose dolphins will begin. Did you know that, in addition, you can be lucky to see some of the migratory cetacean species? The nature of the tours is different depending on whether you choose more or less duration. What are the differences between the 3-hour whale watching excursion in Tenerife and the 4.5-hour excursion? 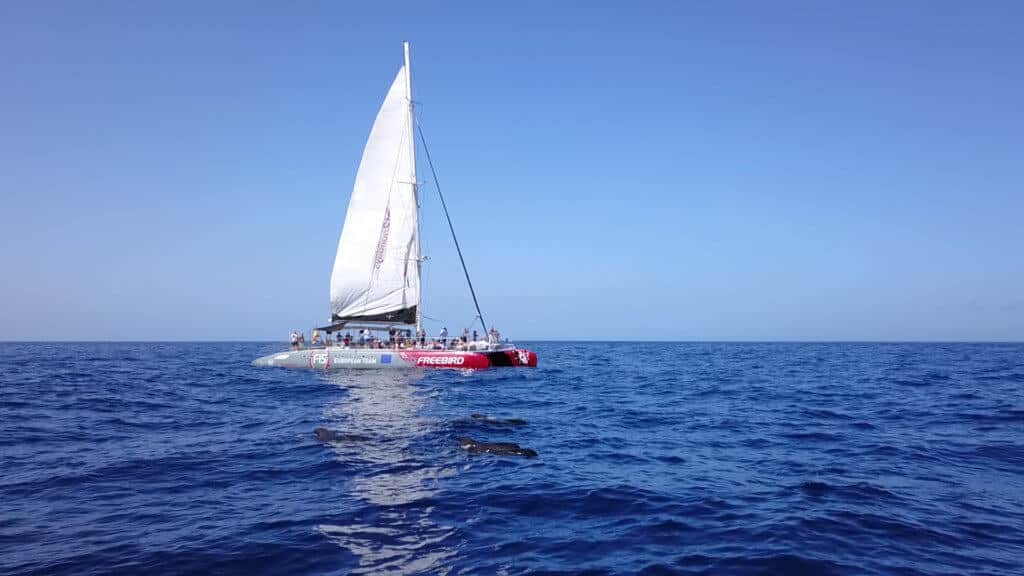 Frebird F15 OneForYou on the 3h excursion in Costa Adeje

It is the cheapest pilot whale and dolphin watching tour and is aimed at all travelers who do not want to miss the possibility of seeing these mammals in their natural environment. In addition to this, you will find yourself navigating in the ZEC area from Puerto Colón. Relax in the sun while enjoying a snack and a soda included in the price. The peak moment of the visit will come when the guide shows the location of the cetaceans.

As if he were a tornado hunter, the professional guide will lead the catamaran captain to the place where the cetaceans can be found. What are the chances of seeing short-finned pilot whales and / or common bottlenose dolphins? Obviously the sighting cannot be guaranteed 100% but that is precisely what identifies this activity as an adventure excursion. Even so, the chances of sighting range between 90 and 98%, so it is very likely that, finally, you will return home having witnessed one of the most fascinating natural spectacles in Tenerife.

The same timetables, the same quality catamarans and crew … What differentiates this four-and-a-half hour excursion from the 3-hour tour? The longer you are in the ZEC area and the further you enter it, the greater chances of sighting resident cetaceans of Tenerife. After all, it’s a statistical question, right? The 4.5-hour tour also has other advantages, such as the possibility of taking a bath during the trip, eating the amount you want for lunch, soda and ice cream. Everything is included! And, of course, the extra duration will allow you to have the opportunity to see the two resident species. Almost with a 100% chance!

Are you a traveler willing to be part of the adventure of whale watching in Tenerife but your accommodation is in the north? The 4.5-hour tour with free bus service from the north will allow you not to miss the experience that will definitely mark your trip to Tenerife. That said, we can only wish you a happy journey and do not forget your camera. You will not regret!

Tenerife has an endless array of natural treasures that combined with an ideal climate and excellent...

The event held at the southern air terminal was chaired by Gunther Hoffman, director of TUI Fly Bene...

Make sure to put it at the top of your list if you are looking for the perfect place for a trip to m...

A Compact Travel Guide to Tenerife